Last weekend I took part in the Beginner Sock class at The Sheep Shop with Louise Tilbrook. I’ve had a crack at socks before, and by that I mean I started a two at a time top down magic loop method. It’s crazy, I always jump right in and whether I’m capable or not and try the most interesting looking thing. You can see my first, and as yet unfinished, attempt here.

I wanted to really get a handle on proper socks. With all the lovely 4 ply yarn I have, I have never made a pair of knitted socks. I also wanted to get to grips with double pointed needles. I was aware of the theory, but have never been brave enough to try. I picked up some needles and some rather uninteresting but hard wearing yarn the week before. I wanted yarn that I could undo and redo many times as I was sure I was going to do that in class. I mentioned the yarn in this post, it is the first yarn I talk about.

The class was wonderful. Just the right number of people. I managed to drop my needles about every 5 mins for the whole 3 hours. At various points I ended up with less needles in the project than I should have had. It was like a yarny game of kerplunk. 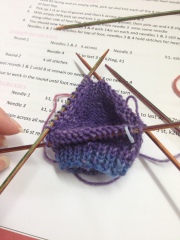 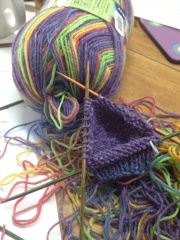 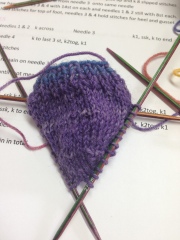 Through all that I still managed to produce a smaller than toddler sock, but the main thing is that it included all the techniques needed to make a full size sock. We decided my miss formed sock was more of a cat/dog sock than a toddler sock. I was going to try and get Cleo to model it for you, but I don’t fancy my chances. 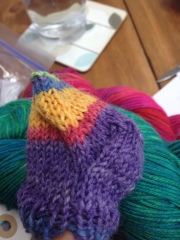 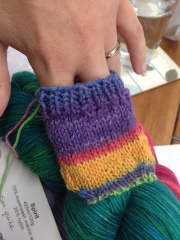 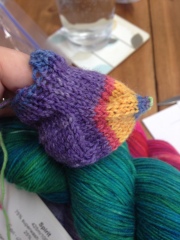 Of course I came straight home and cast on some proper adult size socks. I’ve managed to get past the heel turn so I think that in it’s self confirms that the class is a success. It looks like Louise is doing another class in April, so if you are interested I would highly recommend it. I’ve also just noticed she is doing a toe up class in May, I shall have to sign up for that!